Posted on September 1, 2018 by angelallindseth 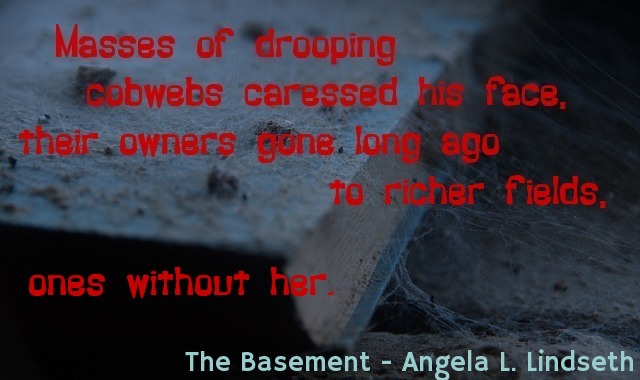 The chill in the air took his breath, sucked it away leaving little icicles of dread that gripped his hope and melted it away.
She was near.
He hadn’t seen her face, but her presence lingered in the crevasses of the dingy basement, hiding behind half-empty cans of paint and chairs with broken legs. Masses of drooping cobwebs caressed his face, their owners gone long ago to richer fields, ones without her.
He gripped the wooden handle of the hammer, the first thing he had found after shimmying his way out the rudely constructed box she had nailed to the rotting supports. The weapon felt rudimentary in his hand; primitive compared to her guile.
Maybe she wanted him to escape.
Maybe she enjoyed the hunt as much as the capture.
Her motives were clearly displayed on the pegboard wall: shears, a saw, dental instruments, and many more items. He could only imagine the torture others had had to endure. She seemed to prefer smaller gadgets, ones that could be inserted into private places. And knives. She had a plethora of knives. But the surgical tools waited front and center, lined up at attention; soldiers in a cruel war.
The bones of others littered the stone floor, adorned with remnants of hair and bits of clothing. The decay wrapped around him with uncomfortable arms. He could feel her above it all, an essence the crept beneath his skin and stole his strength, familiar in a way that escaped him.
He had yet to see her face. Did he know her? Somehow he did, but their meeting seemed from another time like a face on the street.
The creak of the floorboards above his head was punctuated with a drizzle of dirt and dust from years of neglect. The door to the basement split open revealing a sliver of light quickly obscured by her shadow.
“Billy, Billy, are you there?” She singsonged her little rhyme. “Billy, Billy, are you scared?”
Her chant sent a shiver through him. He had heard it before when he was a child. But she was dead, long ago she had gotten sick and died. Pneumonia they said. He had been very young, but he remembered. How could he forget?
The top step creaked under her weigh. Step. Stop. Step.
“Billy, Billy, you can’t hide.” The yelp of metal on metal fell heavy on his ears. “Billy, Billy, come outside.” Tap, tap, tap.
The cats with missing tails. Birds that had lost their wings. Dogs with punctured eyes.
“They let me out for good behavior, can you believe that? Thirty years, but they finally fixed me.” Steel on steel. “They sent me away, but now I’m back. I’m back to send you away, Billy Boy, Billy Boy. Back to send you away.”
“Stay away! You’re not real!”
“Oh, you know that’s not true. You wished me dead. Thought you got your wish, too, but I’m back. Did you miss me?”
She had tormented the neighborhood; filled every shadow with her dread. All of the
neighbor kids fled when they saw her turn the corner, because it wasn’t only animals who were her victims. But Billy was her favorite. Whenever she got the chance she would trip him up, slam him to the ground. If he was lucky all he would get was a wedgie, but he was rarely lucky.
“Billy, Billy, why you run?” She advanced a couple more steps down the stairs. The song of metal on metal kept rhythm. “Billy, Billy, you’re no fun.”
Her face came into view but her features remained blocked by the backlighting. But he didn’t need to see the crooked teeth, the hooked nose. She had never left his dreams.
“Stay back! I’m not a little boy anymore! I’ll bash your head in!”
Her laugh echoed against his despair. “You never had much spunk, you little twerp. Pretty sure you ain’t got none now. You try and hide now. I like it when you run away like a scared little bunny. Remember that time I trapped up in that tree? You was too scared to come down for a good day and a half. Had your folks worried sick, you did. You knew I was watching. I was always watching.”
She held a dagger in each hand, playing them against each other in a macabre melody. Scratch. Screech. Scratch. “I’ve been practicing, Billy Boy.” She displayed her victims with the sweep of her hand. “But they weren’t the ones I wanted. I drew your face on every
one before I carved out their eyes.” She tickled her silhouetted cheek with a blade demonstrating her monstrosity.
Billy backed away, knees scraping on the cold, stone floor. There was nowhere to hide. Wrought iron bars decorated the tiny windows No escape. She inched toward him, the knives caressing each other with a lover’s touch.
He wished he had grabbed one of her tools of torture, but he never could think clearly when she was around. She had always sapped the smarts right out of him. It was no different now. There had never been a level playing field. Here he was a little boy again, but this time he felt her cracked mind and knew his time had run out.
He jumped out from behind the decomposed beam and rushed her, but she didn’t have the panic that embraced him. Calmly she stepped to the side and stuck her leg out. He went sprawling.
“Billy, Billy, you’re so silly.”
It wasn’t so much the pierce of the knife as the heat of his blood that drew his attention. It flowed across his chest in a passionate river, leaving his body in pulsating torrents.
Her words drifted to him as his lights went out.
“Night, night, baby brother. You’re not mommy’s favorite anymore.”
You’ll find all the teasers and links here: Unconfined Delusions, Beyond the Threshold

Putting the finishing touches on The Contraption, a dystopian novel dealing with conversion therapy and social inequality. It's The Handmaid's Tale meets Divergent.
View all posts by angelallindseth →
This entry was posted in Flash Fiction, horror, Unconfined Delusions and tagged Flash Fiction, horror, Unconfined Delusions. Bookmark the permalink.

3 Responses to The Basement, from Unconfined Delusions, coming Oct. 20th