Posted on September 29, 2018 by angelallindseth 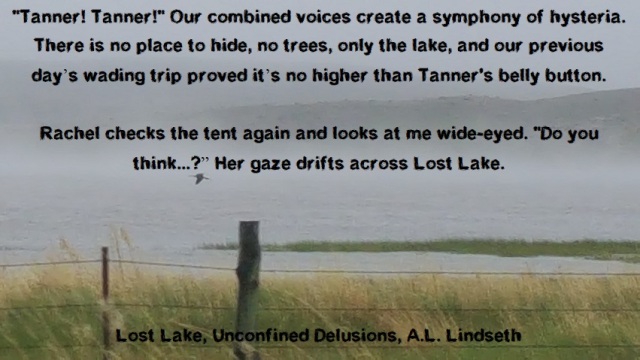 “John, if you’re going fishing this morning, you better get Tanner up.” Rachel snuggles against me on the air mattress before goosing me on the butt.

“But it’s so cozy.” I nuzzle her neck, a trick that usually sends shivers down her arm.

She swats me away with a laugh. “I’m surprised he’s not bouncing around in here already. You saw how excited he was last night.”

We found the lake by accident and marveled that no one else had pitched a tent on its shores. The folks at the store called it Lost Lake and gave each other an odd look when we mentioned we were camping there.

We’re camping fanatics, and our son has refused to share a tent with us since he turned twelve insisting he is old enough to sleep on his own. He is an independent soul, to be sure.

“It’s your turn to make the coffee.” Rachel pushes me out of the sleeping bag.

The mist over the lake leaves a film of condensation on the cover that rains down on my head as I exit.
“Hey lazy butt, get up.” I unzip the flap on Tanner’s tent. His sleeping bag is in a tangled mess, clothes are strewn around just like his room at home. “Tanner?”

Rachel emerges from our tent pulling a hoody over her head against the chill. She gives a chuckle. “One too many smores is my guess.”

“He’s not in there.” Panic sets in. “Tanner!” My voice echoes across the lake.

“What do you mean he’s not in there? There’s nowhere for him to go.”

“Tanner! Tanner!” Our combined voices create a symphony of hysteria. There is no place to hide, no trees, only the lake, and our previous day’s wading trip proved it’s no higher than Tanner’s belly button.
Rachel checks the tent again and looks at me wide-eyed.

“Do you think…?” Her gaze drifts across Lost Lake.

“He’s on the swim team, Rach. Besides, a toddler couldn’t drown in this pond.”

“Then where is he? Tanner! Tanner!”

I take her in my arms. “We have to calm down. He probably walked to that little store we stopped at. It was only a half-mile or so away. Let’s drive down there before we freak out.”

“I’m not freaking out, John. Our son is missing!”

“He’s not missing, we just don’t know where he is right now.”

The bell jangles over our head. The man at the counter gives us a big smile. “Good morning! You folks are up early.”

I waste no time on pleasantries. “Have you seen our son? He was in here yesterday with us. He seems to have wandered off.”

The grizzly fellow removes his hat and scratches his bald head. “Well now, can’t say that I’ve seen any boys around here lately. How old is he?”

“He’s twelve. He was with us yesterday.”

“I remember you folks, but I don’t recall your son. It was just the two of you.”

Rachel’s voice grew pinched. “No, we all came in together. John, show him Tanner’s picture.”

I pull out my wallet. I have his most recent on the top where it is visible as soon as I open it. I rifle through the contents.

“What do you mean? I just saw it yesterday when you paid for the fishing license.”

“It must have fallen out. Don’t you have a picture?”

“In my purse.” She pulls out her pocketbook. “What the… John, my pictures are gone.”

The bells at the door announce another customer. A pleasantly plump woman enters.

“Morning folks. How was your evening? How were the smores?”

The man behind the counter explains. “Darlene, honey, these fine folks say their son is missing.”

A veil of dread shrouds her face. “Son?”

Rachel rifles through her purse. Panic frosts her voice. “Yes, our son, he was with us.” She stops her search. “You saw him.”

Darlene shakes her head. “Don’t recall.” She exchanges a knowing glance with her husband.

John catches the slight. “What do you know? Tell us where our son is.”

“I’m sorry, folks. We don’t recall you son. Maybe you ought to talk to the police.”

Darlene hugs her husband. “Didn’t you tell them not to camp at Lost Lake?”

“It’s been ten years since anything like this has happened. And the other missing kids? None of the parents could prove they even existed. Maybe it’s all just a coincidence.”